OHB Sweden is a Swedish provider of space systems and develops, builds, tests and operates satellites for different kinds of space missions within communications, earth observation, space research and exploration. From low-orbiting satellites via geostationary ones and all the way up to interplanetary missions.

OHB Sweden is a member of the OHB SE Group (ISIN: DE0005936124, Prime Standard) which currently employs over 2.200 people in its “Space Systems” and “Aerospace + Industrial Products” business units. Within this array, OHB Sweden AB belongs in Space Systems.

The headquarters of OHB Sweden in Kista is home to around 70 highly qualified engineers with a long and extensive experience in all areas of satellite system design, development and operations. OHB Sweden has the capability to carry out complete space missions for its customers, all the way from mission analysis and studies up to and including operations in orbit. OHB Sweden is also proud of its ability of taking an active role in the actual creation of missions together with scientists and industrial partners.

In addition to our expert capabilities within mission and system design and integration we also specialize in propulsion and AOCS subsystems. OHB Sweden has experience from 11 highly successful space missions ranging from science to telecom satellites. The 10th and the 11th mission, the Odin scientific satellite and the Prisma rendezvous and formation flying demonstration mission, are presently operated in orbit. We are also a Core Team partner in the Small GEO satellite programme.

We regularly conduct a number of future mission studies, covering amongst others areas such as Earth Observation, Mars Exploration, Orbital Life Extension, Formation Flying, Rendezvous and Near Earth Objects. OHB Sweden traditionally works with leading national and international companies and space agencies to pool the competences required for specific projects. By working in partnership, OHB Sweden is able to participate successfully in large-scale projects. Don’t hesitate to contact us for potential involvement or cooperation in any of your studies or projects.

OHB Sweden has acquired more than 30 years of experience in the area of small satellites and space missions including studies, analyses, system and subsystem design, engineering, implementation, commissioning and operations.

Our main areas of expertise are:

Starting with Sweden s first satellite the magnetospheric explorer Viking, launched in 1986, OHB Sweden has procured, developed or acquired twelve spacecraft, which have all successfully been launched and operated in orbit.

The Swedish small satellite heritage is by necessity that of a low-cost approach applied to tailor-made systems in close collaboration with the scientists. The aim is always to minimize the overall cost for a complete mission without compromising the mission objectives.

Some key issues in the low-cost approach to spacecraft development are the simple customer interface, the small dedicated project team, competitive procurement, elimination of unnecessary management levels, use of off-the-shelf equipment (OTS) and commercial or industrial grade components where possible, and an optimized DD&V philosophy. The low-cost approach has also been applied to the development and organisation of ground control for the OHB Sweden satellites. The operational experience has in addition given valuable feedback to the OHB Sweden spacecraft development teams and a special understanding within the company of operational issues.

OHB Sweden is one of Europe’s leading propulsion suppliers. Our knowledge and experience cover the complete range of different propulsion systems; electric propulsion, liquid propulsion as well as cold gas propulsion. We are able to understand and define the propulsion system, from the very early project stage and throughout the development and operating phase.

For the last 30 years, OHB Sweden has built its own applications for monitoring and control of different space projects. As missions became more and more advanced, an efficient monitoring and control system became necessary. RAMSES (Rocket and Multi-Satellite EMCS Software) is a new generation general control system, developed by OHB Sweden, which includes the core functionality of a mission control system while offering great advantages compared to other control systems available on the market. The system can be applied to both satellite and sounding rocket missions and is designed to be used during all the phases of a space project, (development, integration, validation, and operation), thereby significantly decreasing project costs.

OHB Sweden relocated to new facilities in Kista, Stockholm, in January 2014. The new facilities will allow OHB Sweden to even further increase its efficiency and quality level. With more room for expansion, a more efficient layout of the development, process and manufacturing area, including cleanroom testing capabilities, this is an important milestone in OHB Sweden’s development. All parts of the cleanroom facility are approved in accordance with ISO class 8, and upgradeable to class 5. 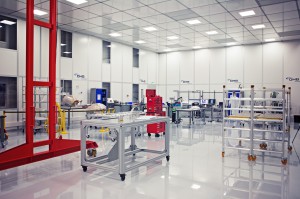 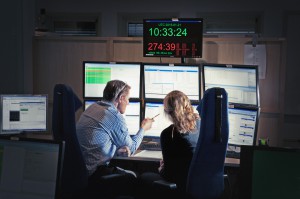 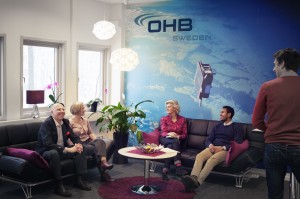 The members of the Executive Management of OHB Sweden AB are:

The members of the Board of Directors of OHB Sweden AB  are:

Marco R. Fuchs
Chief Executive Officer, OHB-Holding
Member of the Board of Directors since 2011

Oliver Salisch
Vice President Affiliate Control / M&A, OHB-SE
Member of the Board of Directors since 2011

Guy Perez
Chief Technology Officer, OHB System AG
Member of the Board of Directors since 2017

Bo C. Johanson
Senior Advisor
Member of the Board of Directors since 2011

Maria Caderas de Kerleau
Employee representative, OHB Sweden AB
Member of the Board of Directors since 2018

Bastiaan Lagaune
Employee representative, OHB Sweden AB
Member of the Board of Directors since 2019

OHB Sweden AB is a subsidiary of the German OHB-SE. It was created in 2011 when OHB Sweden took over the entire business of the former SSC (Swedish Space Corporation) Space Systems division.

OHB Sweden also took over the absolute majority of the personnel and thereby the long and extensive experiences in all areas of satellite system design, development and operations. In being a company with a long space experience, OHB Sweden has the capability to carry out complete space missions for its customers all the way from studies up to and including operations in orbit. OHB Sweden is also proud of its ability of taking an active role in the actual creation of missions together with scientists and industrial partners.